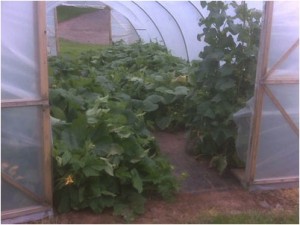 The nights may be cold but the days are warm and this week I have been busy catching up with my sowing schedule as well as transplanting.  The colds nights have meant my cloches stay up.  In the polytunnels early spud Rocket is in flower and asking to be harvested.  I have transplanted a block of 20 sweet corn Early Extra Sweet and a row of squash grown from home-saved seed called Table Queen.

This year I have spaced the plants a metre apart and will keep them trimmed rather than allowing them to go wild as happened last year even though I did get a pretty good crop of about thirty squash from just four plants.  In this picture Table Queen are on the left and behind the cucumbers by the door are rapidly growing Pennsylvania crookneck.

With this prolonged spell of dry weather it has been necessary to keep my seed beds well watered.  Those under the cloches retain moisture much better than open ground exposed to evaporating winds.  During the week I have potted up celeriac into 10cm square modules in the greenhouse, thinned carrots in another greenhouse and started pulling radishes.  It is one of the great pleasures in this world to select the largest specimens, pull them, wipe away any soil on the seat of one’s trousers and eat. And with the first harvest another sowing.  Just a short row the width of a raised bed, which will be repeated every ten days or so over the coming months.  Also sown was flat leaved parsley and beetroot, fennel, carrot and rocket under a cloche.

Spring onions are emerging and my transplanted onions are starting to grow away but need regular watering until fully established.  Over the weekend I’ll transplant calabresse and Romanesco which have been hardening off in a cold frame, making sure they are planted right up to the base of the second set of leaves and well formed in.  If night-time temperatures are set to improve I won’t bother to cover them with bottle cloches.  I might be tempted too to sow some climbing French beans in a bed recently cleared of winter cabbage.  Hopefully there will be more than just a solitary asparagus spear to have for lunch on Sunday!