It has been a trying but very busy summer and it is with considerable guilt that I see it has been three months since I last blogged.  Quelle domage.  A number of people have been giving me a hard time, so now I shall do my best to make amends.

Firstly, despite all the shite weather I have had more success than failures.  Last year I suffered terribly from white rot on my onions and garlic.  So awful was it that I thought I should abandon trying to grow these vegetables on my allotment for several years.  I then did some research and discovered that growing brassicas as a green manure on infected ground could help to limit the disease, which is caused by a pesky nematode.  To that end I sowed Calente mustard seed on one of the raised beds I had earmarked for onions last autumn.  In the spring I ran the mower over the crop to shred it and then turned it into the soil.  I allowed it to break down over a few weeks bedore planting up onions.  And this year I have no white rot.  This is a method I will now continue to employ for next year’s spring crop.  I have just sown some more mustard seed in a bed I would like to plant garlic into in November.  Hoepfully the next couple of months should be long enough to get the mustard to grow sufficient to kill aberant nematodes.

since the British weather has been going loopy I have decided to grow more crops in my polytunnels for everyday use.  My over-wintered peas and beans were fantastic this year, so I have now planted a bed of the red onion variety Electric for an early summer crop next year.  I have also planted up some of the garlic I rreceived from Oman with a comparator crop planted on the allotment.  I have also got the fabulous kale Ragged Jack as well as January King cabbages gowing under polythene as well as a late sowing of beetroot, carrots and some tasty winter crops of mizuna, red mustard, lettuce – with more to follow soon – spinach, chard and the fabulous winter radish Pasque.  With summer over and the nights about to become longer than the days I hope we stay dry to allow my squash and sweet potatoes to ripen in the polytunnels. 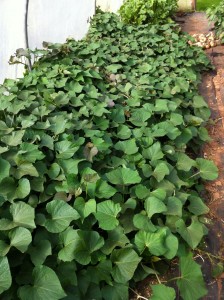 Back in May I bough for a tenner a half-hundred weight sack of Charlotte spuds which I put in an empty fridge at a temperature of 5 degrees centigrade.  Although some of the tubers sprouted mutant-looking chits I have planted a large number which are now taking over one half of a polytunnel!  When I see spuds for Christmas being sold for as much as fifty pence each I am glad I have tried this way to save money.  Also, with spuds likely to cost an arm and a leg this winter it is good to know I will be digging the beauties from December through to the end of February.  If you have can lay your hands on a few Charlotte or Duke of York it is not too late to plant now; ideally into a greenhouse border, or tubs or bags in a greenhouse or very sheltered spot.