Growing potatoes is a great way to clear virgin ground because the crops suppress weeds.

I like to start a new bed with potatoes for this reason. I also like to be eating freshly dug spuds by my birthday which falls in late May.   You can plant seed potatoes in open ground towards the end of March without protection and start to harvest in early June. But if you fancy them sooner watch the video. In it I also give you a quick guide to my allotment on a mild spring morning in mid-March.

Planting early potatoes is easy and very rewarding I promise. There is simply nothing better to eat than boiled fresh new spuds with lots of butter.  I like to grow mine through a black polythene mulch which stops weeds and retains moisture.  I cover the rows with a polythene cloche to keep out late frost.  In this video I show you how I prepare the ground and make the cloches using wire bought from the local hardware store and polythene from rolls I bought at a local horticultural supplier.  Very cheap and effective.

Prepare your ground in late winter by adding plenty of well rotted manure or compost.  Alternatively sow a green manure like Physalia the previous autumn and dig in during the winter.

In February cover the ground you wish to plant your early potatoes in with a mulch of black polythene and secure by weighting down with bricks or earth.

Decide which variety of early potatoes you want to grow.  My favourites are Accent, Rocket and Duke of York.  Buying by mail order is very expensive.  I prefer to visit my local garden centre, or, as a member of Garden organic go to Ryton on Potato day at the end of January and select just the number of tubers I need.  My raised beds are a metre wide by 6 metres long so I can grow two rows of 18 tubers.  Select firm tubers that are no smaller than a tangerine and no bigger than your fist.

Put the potatoes into egg trays to ‘chit’ in a warm and well lit room.  After a few days you will see cluster of little shoots emerge from the potatoes.  Be sure that each potato sits in the tray ‘shoot end up.’  After a month or so the shoots will be three or four centimetres long.  It is time to plant them out.  If the potatoes are shooting too quickly then move them to a cooler room or into a light shed.

Cut crosses about 10cms long in the polythene at 30cm intervals.  Using a dibber make holes through the cuts about 15cms deep and put a potato in each hole being sure to keep the shoots facing upwards.  Cover with soil.

Each row of potatoes should be 80cms apart.

Now you need to cover the crop with a cloche. I use polythene cloche film which I buy in 200metre rolls from a horticultural supplier.  I cut 1.4 metre approx. lengths of 2.5mm gauge galvanised wire (purchased from a building supplier) and make hoops which I push through the polythene at about 1 metre intervals.  I cover these hoops with the polythene and tie firmly at each end on to a cane pushed well into the ground.  I then push a second hoop over the cloche close to the other hoops to hold everything in place.

Using this method you should not need to water the crop, but if conditions are very dry as you harvest the crop you can irrigate through the holes.

The potatoes should start to emerge after about three or four weeks.  So long as the young plants do not touch the polythene they are unlikely to be affected by frost.  However, late frosts can burn some leaves a bit, but not enough to damage your crop.  By mid May the plants will have filled the cloches which should be removed.

The crop is ready to start harvesting once the first flowers begin to form.  Start at one end and remove a corner of the polythene.  A number of tubers will be close to the surface.  Gently lift the plant and you should have a couple of handfuls of egg-sized new potatoes.  As you work along the rows over the coming weeks the crop will get heavier and the tubers larger. 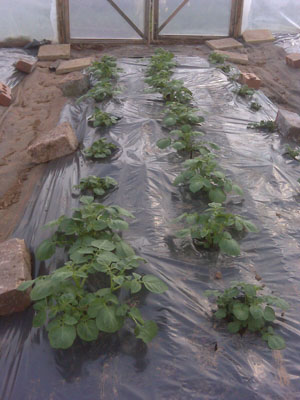 I prepare the ground as I would for early potatoes but this time I don’t use any polythene.

I chit the potatoes in the same way as for earlies but I keep the ‘seed potatoes’ in a light and cool shed because I do not want them to be fully ‘chitted’ until early April which is when I will plant them out.

Using a dibber I make 15cm deep holes 30cms apart in rows 80cms apart and plant individual tubers ‘shoots up’ in them and lightly cover with soil.

After two or three weeks the first shoots will appear above ground.  If there is any danger of frost start earthing up now. Otherwise wait until the first shoots are about 5cms tall.  Earthing up means drawing soil from either side of each row to create a ridge which the potatoes will grow through.  This encourages heavier crops.

Potatoes do not generally need watering unless the summer is very dry.  As they grow weed the ridges.  However, once the foliage covers all the ground weeds are effectively very well suppressed.

Late blight can be a major headache for main crops and there really is no organic means of protection.  However, there are fungicides you can use to spray the crop if you get an outbreak in late summer.  Telltale signs are a browning and blotching of the leaves.  Blight is particularly prevalent during damp weather from July onwards.  If you get a bad attack cut down the foliage and burn.  The trick is to avoid blight spores getting on to the soil and then on to the potatoes as you harvest them.

Harvest during September or earlier if you get blight.  Lift the potatoes in the morning and leave to dry in the sunshine for a day. I keep potatoes in sacks in a dark corner of my shed or garage.  Some varieties like Pink Fir Apple, which cost a fortune to buy but can yield huge crops, will keep through to April if completely dry and clean.  It is fun to grow varieties like this which are expensive and delicious.  Also old-fashioned types like King Edwards, which make the best roast spud in the world, are good, but if you are plagues by blight then growing blight resistant varieties will yield better harvest.