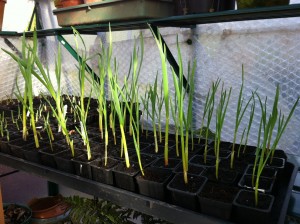 After a very mixed harvest of the Omani garlic I received back in June 2012, planted up in the autumn of 2012 and harvested in late July 2013, both in a polytunnel and outside I selected the best cloves to plant again to see if I could get a better harvest this year.  At the end of November I planted up cloves as well as cloves of Provence Wight and Chesnok Wight.  As you can see from the photographs taken in the middle of January, the Omani garlic is racing ahead, although the habit is somewhat different.  Over the coming weeks I will move the plants out of the greenhouse and into a cold-frame ahead of transplanting the Omani under cloches in March where I hope they will respond better to more warmth than the English Wight varieties. 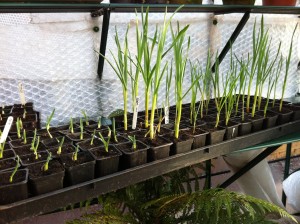