With a brief but lovely sunny day yesterday I was able to complete the preparation of one of my polytunnels which will be planted up with new potatoes in the next week. 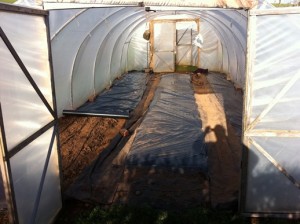 Note the leaky pipe irrigation system under the unfinished left-hand row.  This thirty-foot tunnel will allow me grow p to 8 rows of potatoes. 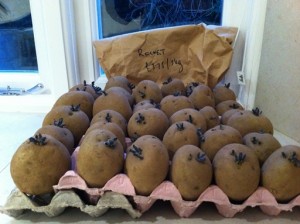 Back in November I sowed a broad bean called Aquadulce in my fifteen foot tunnel. 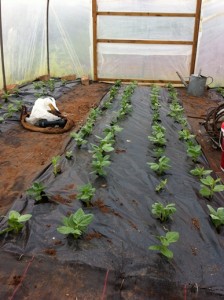 After the horrors of the winter of 2009/10 when my entire crop of overwintering beans rotted under the snow I figured it was time to give them a better chance under cover.  Now, with the days getting longer they are starting to put on a bit of a spurt.  With luck I will have beans to accompany my plate of new potatoes in May.

And finally, today I sowed in trays in the greenhouse a wonderful onion called Up To Date.  I saved the seed fromonions I first grew in 2009 and then re-planted in 2010 to go to seed.  This variety is off-list and only available from the Heritage Seed Library at Garden Organic, or from me if you send an s.a.e!  It is a wonderful long-keeper – at least until late March.  I also sowed two varietes of leek – early for me, but one from HSL called Early Market likes to be started now and I am trying another long-season typ from Thompson and Morgan called Porvite for the first time.  I’ll make a sowing of a late variety next month.