My friend John Tamplin likes to sow his over-wintering broad beans on Guy Fawkes day and I will be doing the same.  However, I first must clear squash out of one of my greenhouses to make room.  The F1 variety is a cross between Crown Prince and a butternut type and is called Autumn Crown and tastes fab.  They are great keepers too.  The fruit are a golden yellow and nice and ripe now.  I’ll store them in the potting shed where they should keep into late winter.

In place I plan to sow home saved seed of the classic bean Aquadulce and  also a row of home saved pea called Douce Provence and a few more Omani garlic cloves too.  I like to grow these over-wintering crops under cover these days as the winters can be so cold and damp that once trusty varities suffer.  At least in the greenhouse I am reasonable sure I’ll get a good early crop.

I have harvested the last of the beans I am saving for seed to put in my library, grow next year and share.  They include the black-seeded runner bean Meesner, the show bean which is also delicious to eat when young called Jescot Longun.  This runner bean has grown to 23 inches this year.  A guaranteed show-winner.  Other beans include a fantastic climbing French bean called ryder Top of the Pole and a Swiss pole bean and a dwarf French bean also from Switzerland called Brown Swiss.

Yesterday I had a great harvest from my polytunnels which I brough home in the back of the car.  In the picture you will see Crown Prince squash and a small Pompeon squash too; Italian Treveso onions courtesy of Franchi seed, ruby chard, winter radish called Pasque, Jescott Longun pods, some salad leaf, Mizuna and red Japanese cress and hidden in amongst it all a few beetroot too and also some sweet pepper from Syrian seed I found in Aleppo last year. 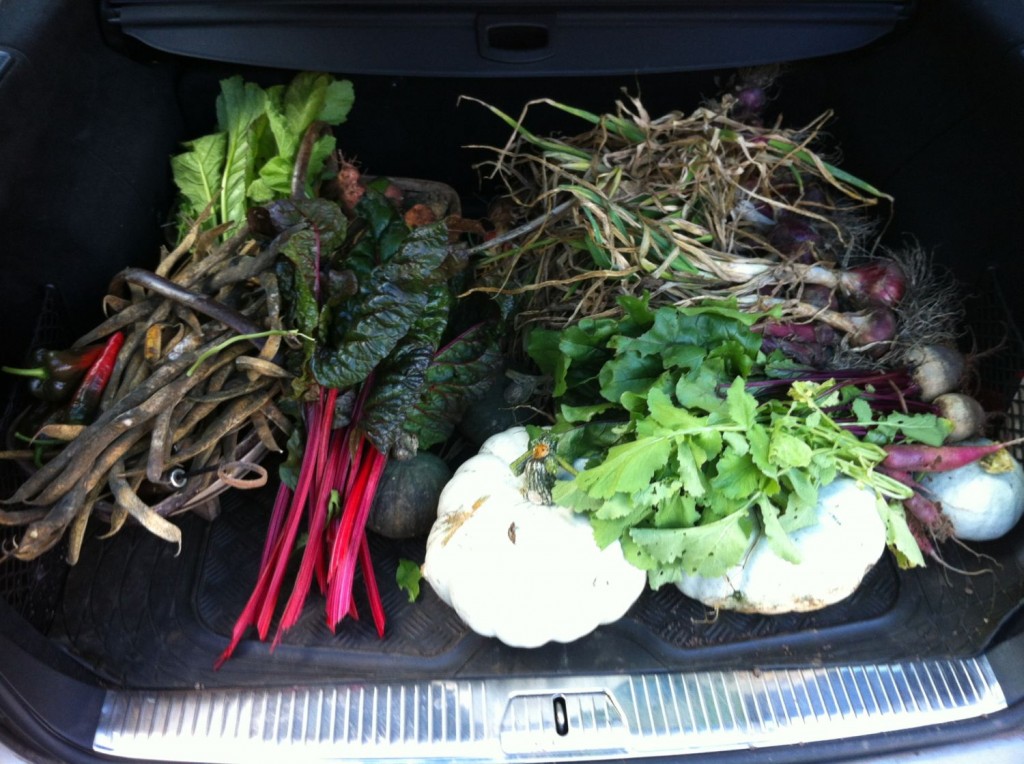