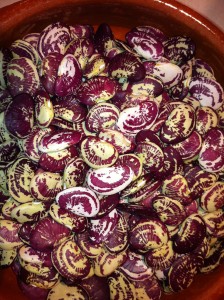 It has been a very long time since I last posted or did anything to update this website, for which I apologise. Torn between time growing, time in front of the computer and time looking after this website, only the first action has proved well spent! Today I am gardenless, having sold up and moved temporarily into a small house with a small garden. Fortunately I have been able to erect a decent-sized greenhouse in order to feed my addiction whilst I look for a new place to live and a new garden to create. The plan is to bring all my growing needs into one place. Until we moved I had gardens, greenhouses and poly tunnels within walking and driving distance of my home. Now I plan to devote more time to pursuing my passion to grow interesting and rare vegetables and fruit and to expand my seed-saving and seed-sharing efforts, starting, with luck, in the spring of 2014. But first a quick update and, what I think is a great story!

Back in late January I spent a month in Myanmar, aka Burma, travelling widely to visit the sites and check out what everyone was growing. For the last half a century or more, Myanmar has been isolated and inward-looking. Trade has been primarily with the Chinese. It is a country of diverse climates, but for the most part, being tropical, grows pretty much anything and everything. Until the outbreak of WW2 the Irrawaddy delta was the most productive and fertile rice-growing region in the world, with more than 20% of the world’s crop grown there. The vast majority of the population have lived as subsistence farmers growing traditional crops on small plots. From a seed-collectors point of view, this is most exciting. as farmers have been selecting and saving their own seed for generations. Only now, with the country opening up and trade with China and also Thailand increasing exponentially have farmers had access to modern commercial varieties. this may be a good thing in terms of yield, but is potentially disastrous for the genetic diversity of many native and indigenous vegetables that could be lost over time.

I spent much time visiting small growers, snooping around vegetable plots and checking out local markets and was thrilled to see a wide range of locally grown varieties, especially beans and capsicum. But by far the most exciting discovery was of a wonderful butter-bean with not only a colourful skin but a colourful story behind its name. I travelled along the China Highway to a little town in the east of the country called Hsipaw, a hang-out for back-packers and others wanting to trek into the hinterland to meet some of the tribal minorities. I spent a day with a delightful guide who showed us the impact of Chinese business on the local agriculture, especially the cultivation of water melon and pineapple.

In the market I had seen a large red and white bean being sold. The beans were boiled and skinned. My guide was able to tell me that this bean is called The Angry Bean because Burmese superstition says that if a pregnant woman tries to harvest a crop the beans will stop growing. His mother had been growing this bean for many year and seed had been passed through the family for generations. He gave me a handful the next day and I have grown them successfully this year, both in a bed in a green house and also in a large pot in a sheltered sunny spot. 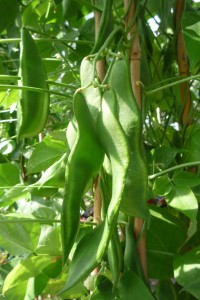 This bean is of the same family as our runner bean – as are all butter beans – with tiny white flowers which turn yellow once pollinated. The pods grow slowly filling with thumb-sized beans, up to three per pot. The beans are mottled pale green and red when freshly shelled, drying to red and white. They are best eaten as shelled beans, rather like a Borlotto. Steamed for eight minutes they can be skinned if required but I like the whole bean. They have a distinctive chestnut flavour and are delicious eaten on their own with a little butter, salt and parsley.  I have never seen this bean before and believe it is certainly native to this part of the Far east and may well be native to Burma.  I found six beans I did not recognise in my travels.  Some appeared tro have been grown commercially, others are definitely heirloom types which I will trial over the coming years.  I plan to grow the Angry Bean regularly and hope to have some to share from next year. 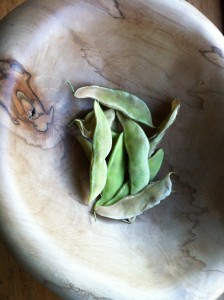 2 thoughts on “THE STORY OF THE ANGRY BEAN”