I do not sell seed so everything on this list is free.  However, I do ask most respectfully ask for a donation of £1 for each envelope they come in to help towards the costs I incur in my seed-saving endeavours and as a contribution to the HSL.  Please email me with your request as supplies run low very quickly.  Once I confirm please send an SAE  (A large second class stamp on a padded A5 envelope is ideal) and the cost of the envelopes either in the form of stamps, as cash or you can pay using PayPal using  my email adam@veggingoutwithadam.com

SYRIA – seed harvested 2019.  This wonderful courgette was grown from seed I discovered in a market in Damascus.  The plants are trailing and will crop through to the end of October if given protection.  Good resistance to powdery mildew, (which is easily treated with regular applications of potassium bicarbonate).  My absolute favourite courgette ever as the fruits have low water content and, unlike most modern varieties, actually has real flavour.  Great used in frittata or grilled.  Grow three plants a metre apart to ensure good pollination and plenty of fruits to enjoy and share. 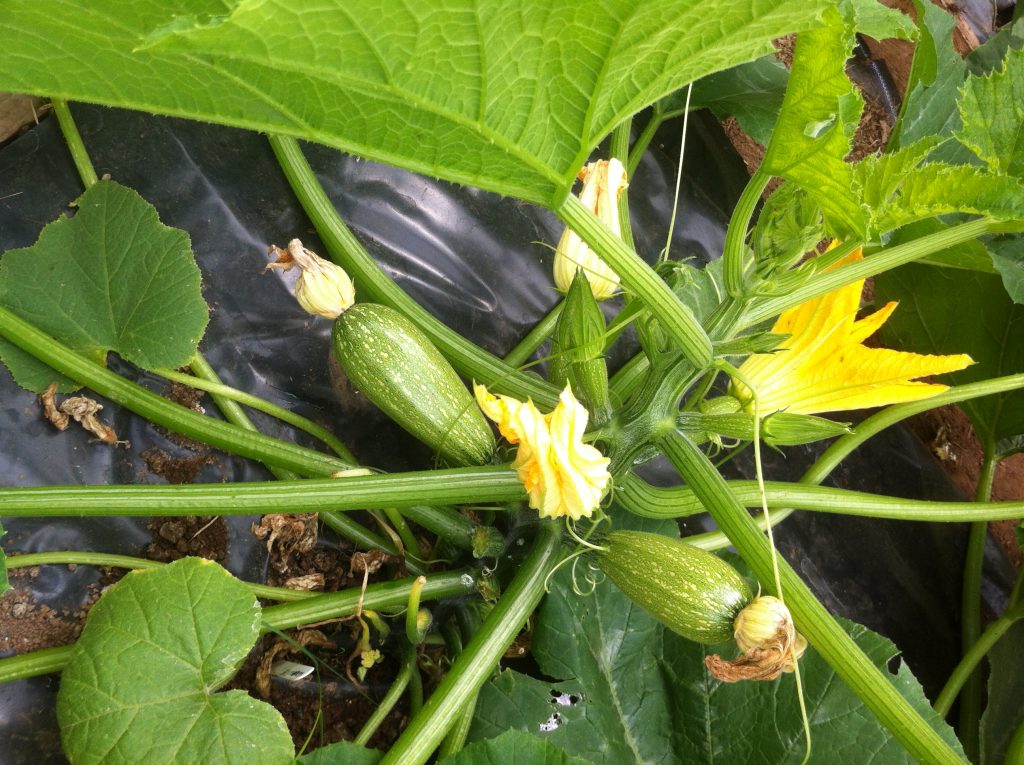 BRECON BLACK – seed harvested 2017.  A Welsh heirloom that has come to me via the Irish Seed Savers organisation.  I have grown this variety for wider cultivation in Wales.  It was grown in the gardens of St. Fagans outside Cardiff and will be grown in 2019 at Aberglasney gardens in West Wales.  Tender pods when harvested young. Shows some variability in length but needs to be more widely grown and enjoyed, especially in Wales

LAOS MANGE-TOUT –  seed harvest 2017 –  Pea grows to 6 feet .  A really exciting find in a market in Vientienne, Laos in 2009.  The seed are speckled dark blue and I presumed would yield a purple pod.  The plants are rampant with pale purple flowers.  very pretty.  But surprisingly the pods are green.  Absolutely delicious they can be harvested when very young, blushed pink like a maiden’s blush as mange-tout or when starting to fill as a sugar-snap.  They can also be harvested as shelling peas. Sow a double row in a flat-bottomed drill one inch apart by two inches between the row and cover with a good inch of soil. Firm down and keep well watered until germination. Need to be able to grow up secured pea-netting or sturdy 6′ pea-sticks. 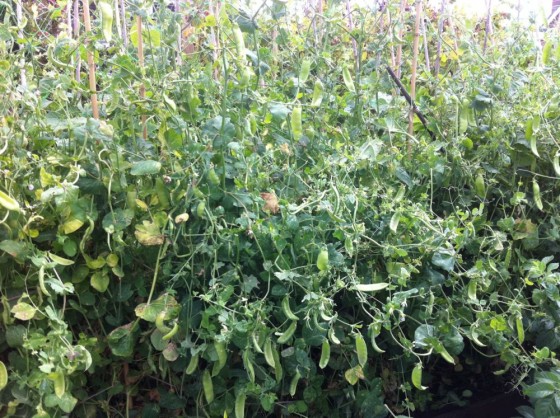 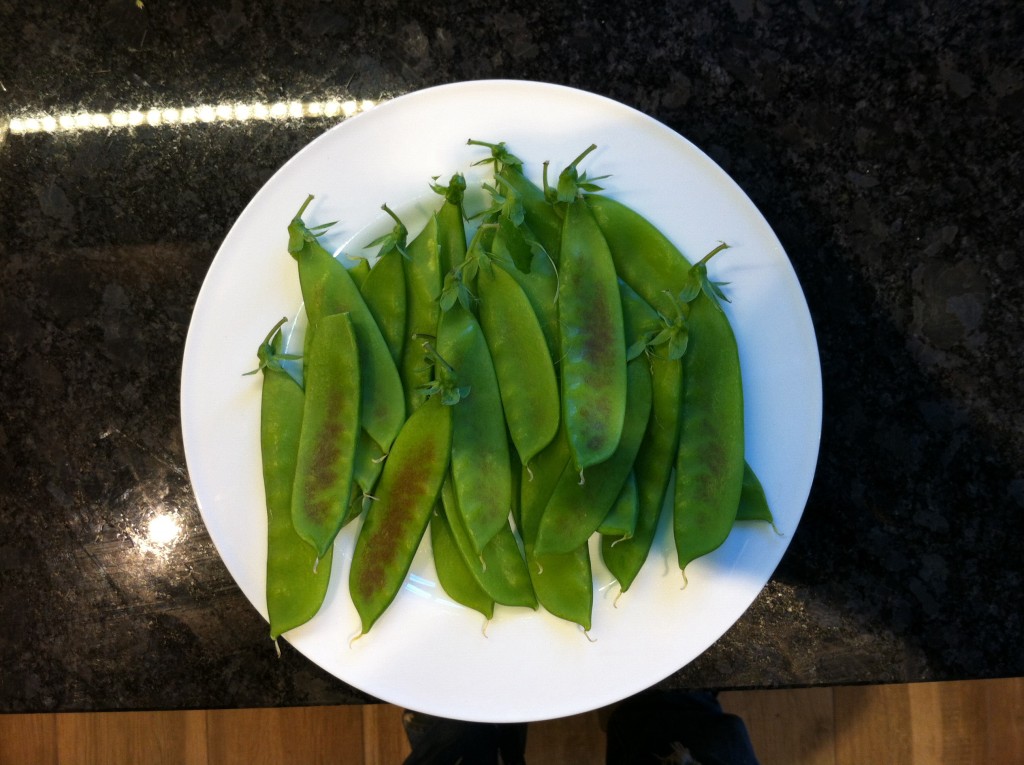 AVI JOAN (Avi Juan)- seed harvested 2017 – This truly magnificent pea was given to me by Jesus Vargas, a passionate seed guardian who has  collection of about 150 native and heirloom Spanish and Catalan vegetable varieties including this giant.  Bred by his grandfather and named after his grandmother, Ave Joan grows to 2 metre, with large flowers that attract large numbers of bees.  The pods are long with mostly 10 fat peas of a divine sweetness.  Excellent to freeze and because of their size a punnet of pods yields a veritable feast.  Until Jesus gave me some seed he was the only person to grow this awesome pea. 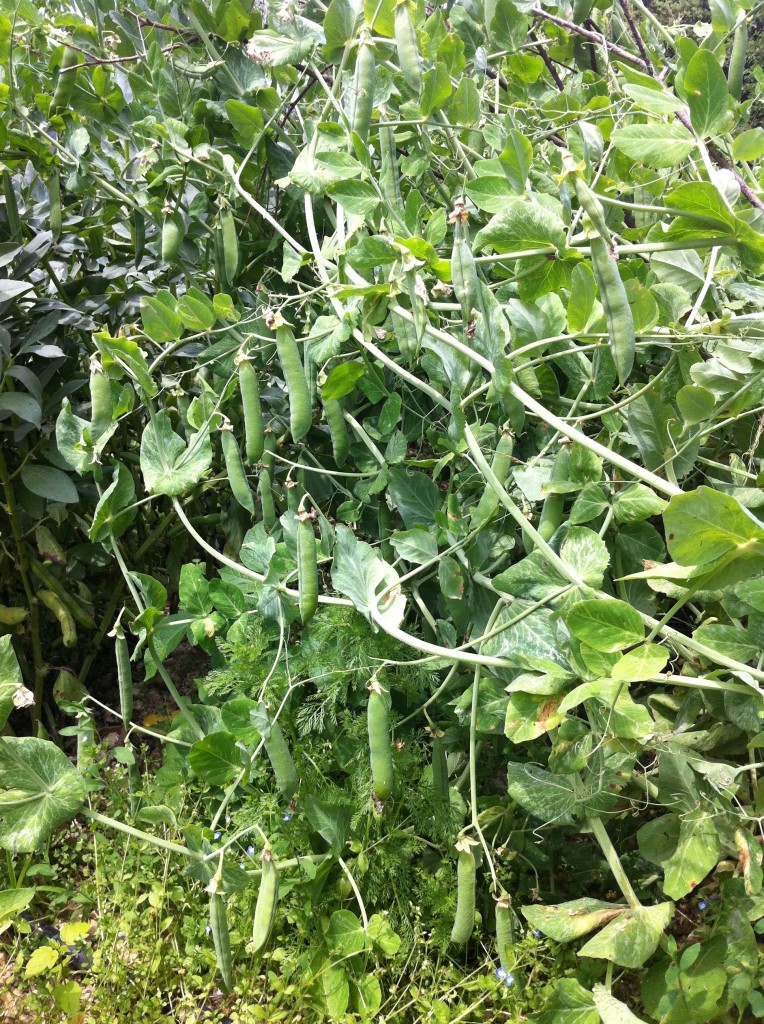 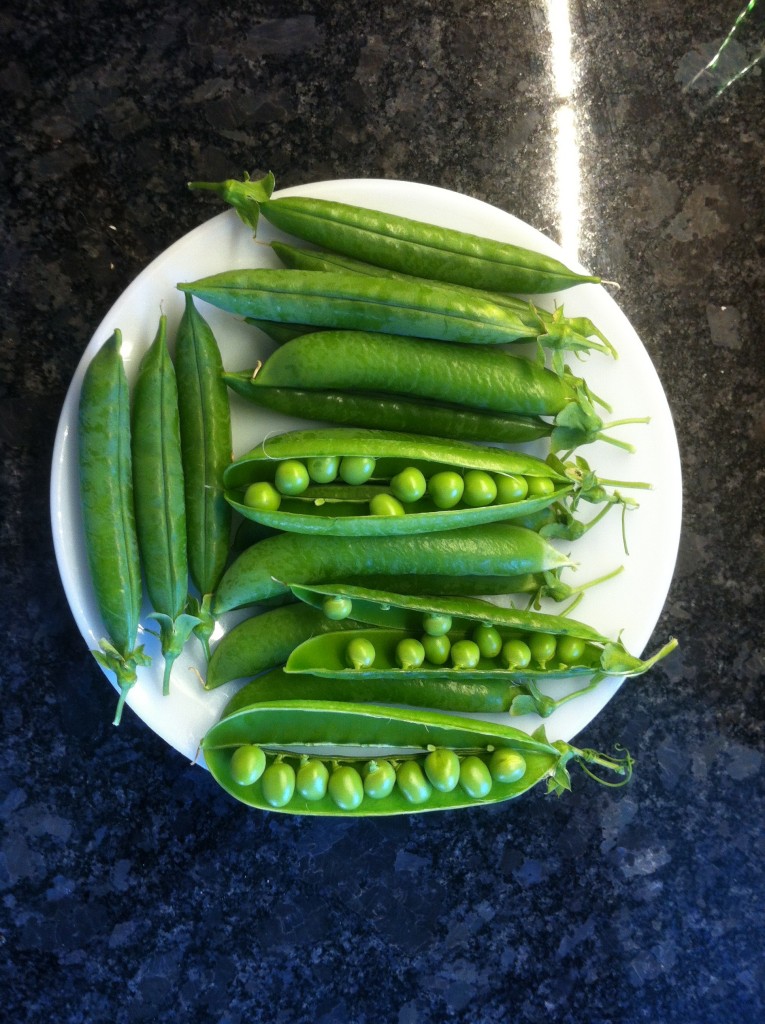 JAUNE DE MADRAS mange-tout  – seed harvested 2019 – as glorious in the flower border as it is on the plate – if you can get them into the kitchen before eating them all!  A 19th century French heritage variety that was claimed to come from India although there is no evidence that I can find to support this.  Synonymous with the recently re-introduced Golden Sweet mange-tout which was bred in America.  Documentary evidence suggests the Americans wrongly claimed there pea came first.  Ah, the duplicity of pea-breeders from those times! 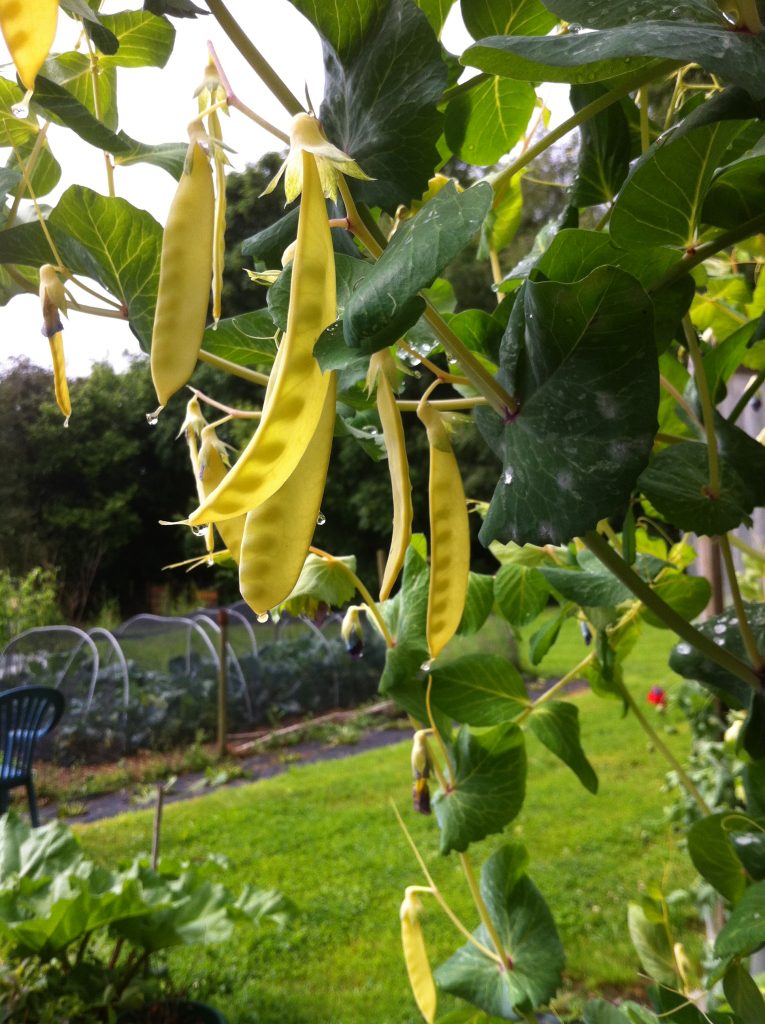 HANGMAN’S DOOR – seed saved 2019 – I cannot recall how I acquired this pea.  If you gave it to me please let me know!  There is no record of it in the national lists or old catalogues and the name is inexplicable.  A tall pea, pretty flowers and purple pods.  Similar in many ways to other purple-podded peas but quite unique. 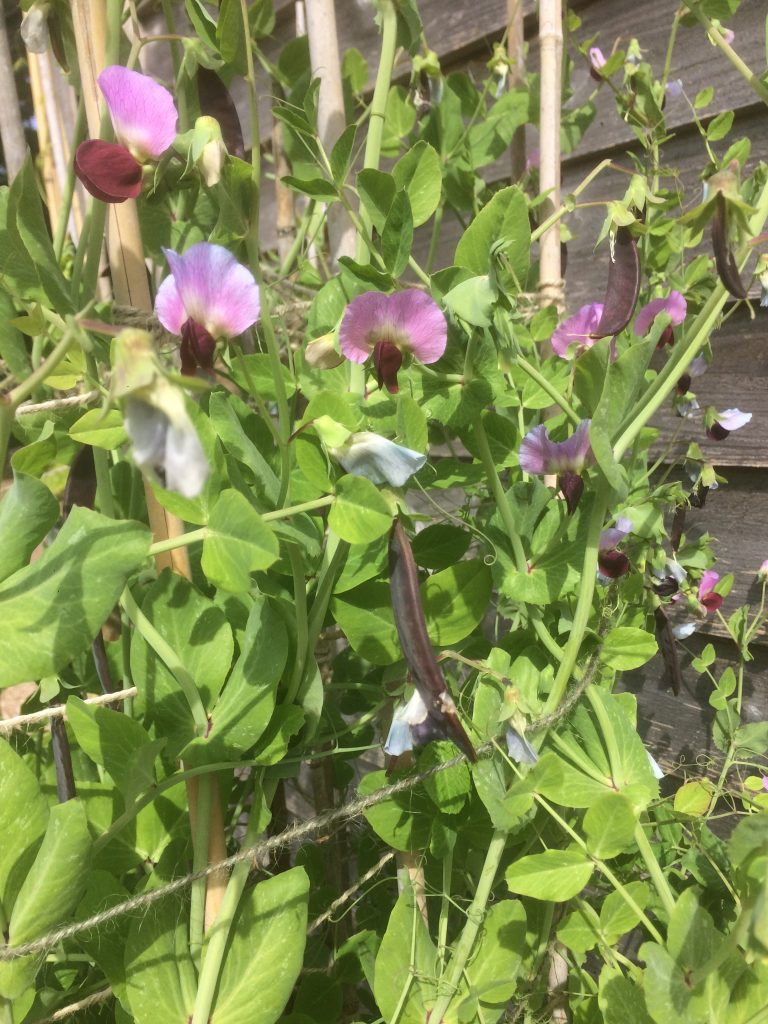 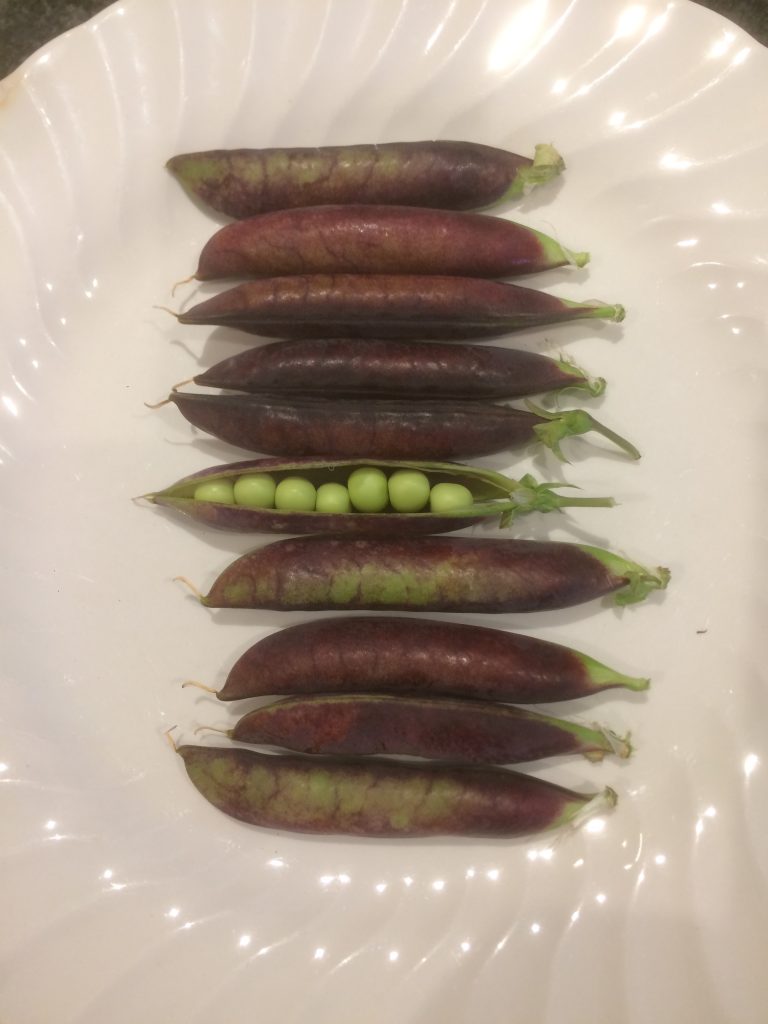 BLACK CUBAN (C. frutescens) – Seed harvested 2016 – An heirloom that has a bushy habit with lovely mauve flowers and a forest of small black chillies that turn a deep red when ripe.  Hot and tolerant of cold.  This photo was taken in December.  Will continue to crop all year if kept at a minimum of 10 degrees. 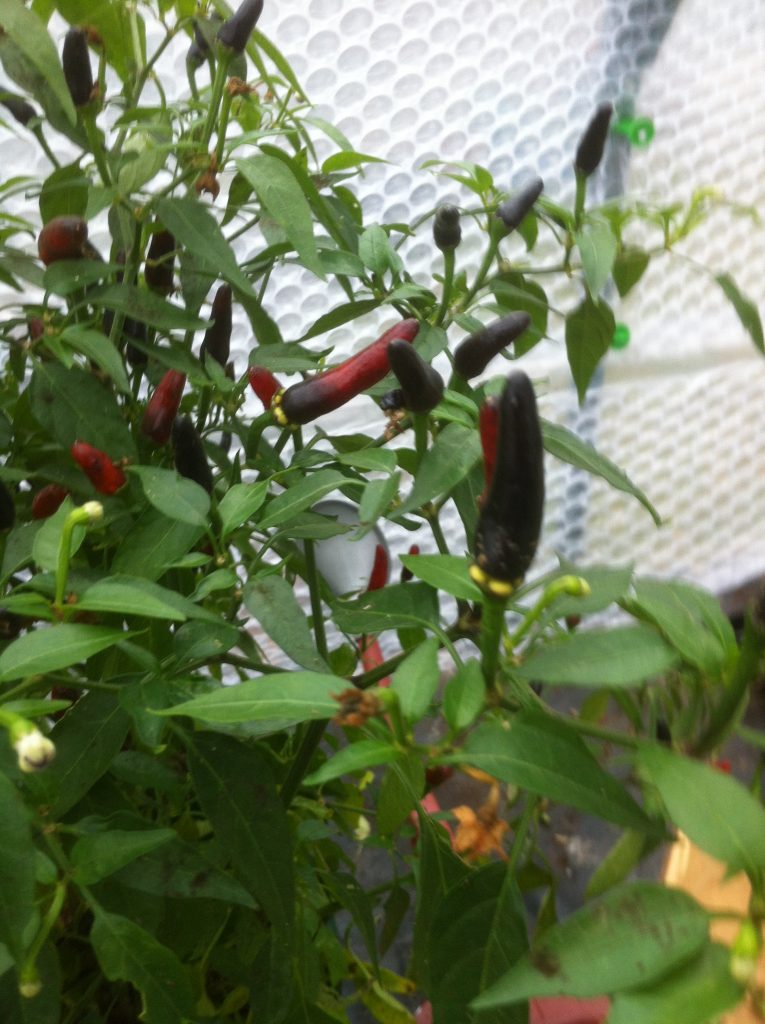 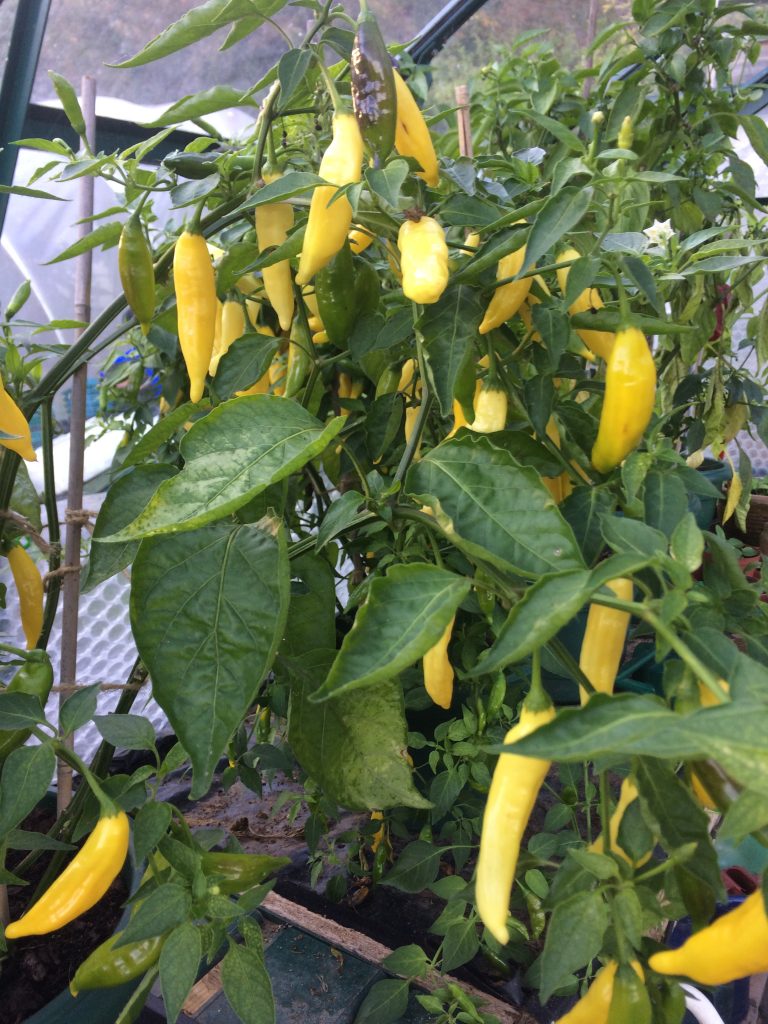 PIMENTON D’ESPELETTE (C. annuum) seed harvested 2011 – a protected French variety that is used as a condiment in local cuisine.  Easy to grow with heavy crops of large medium spicy fruits which should be dried and then milled for use as course chilli powder or as an alternative to pepper. Great on scrambled eggs and sprinkled on fritatta as well as to spice up casseroles and sauces. 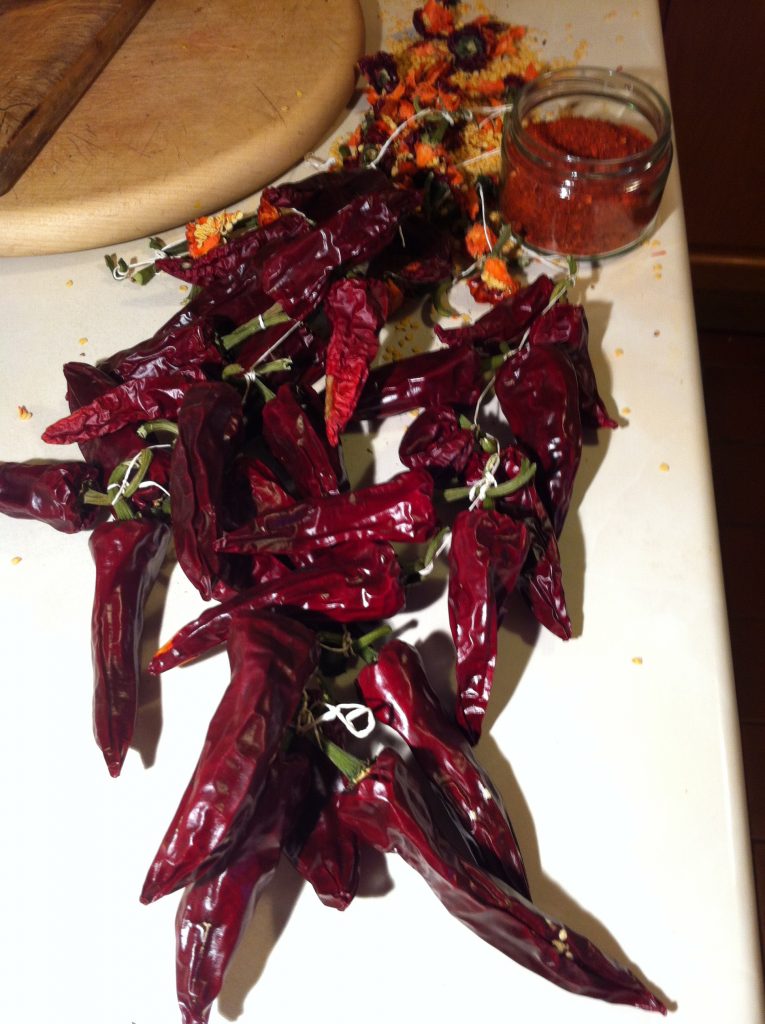 SULAWESI (C. annuum) – seed harvest 2017 –  limited stock – I found this chilli in a market on the island of Sulawesi in 1990. It grows to 4″ is pencil thin and very hot. Prolific, Early and easy to grow but can be slow to germinate. Sow in gentle heat in early February and transplant when four true leaves have formed. Pot on in May into 10″ pots in greenhouse. Does well in a border and outside in a sheltered sunny spot. 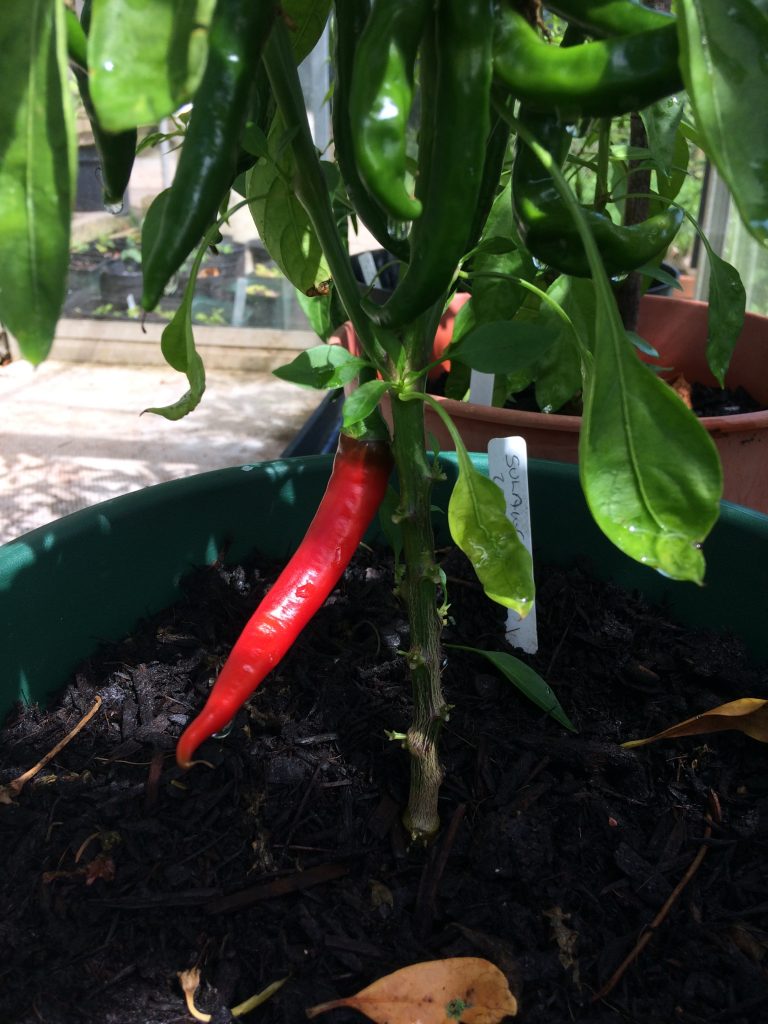 THANLWIN RIVER (C. annuum) – seed harvested 2016 – I was given this chilli by a Burmese farmer whose family has grown them for many years on the banks of the Thanlwin river in southern Myanmar.  Does well in the UK with an early start.  Abundant long hot fruits that can be eaten fresh, dried and also ground up for a great chilli powder. 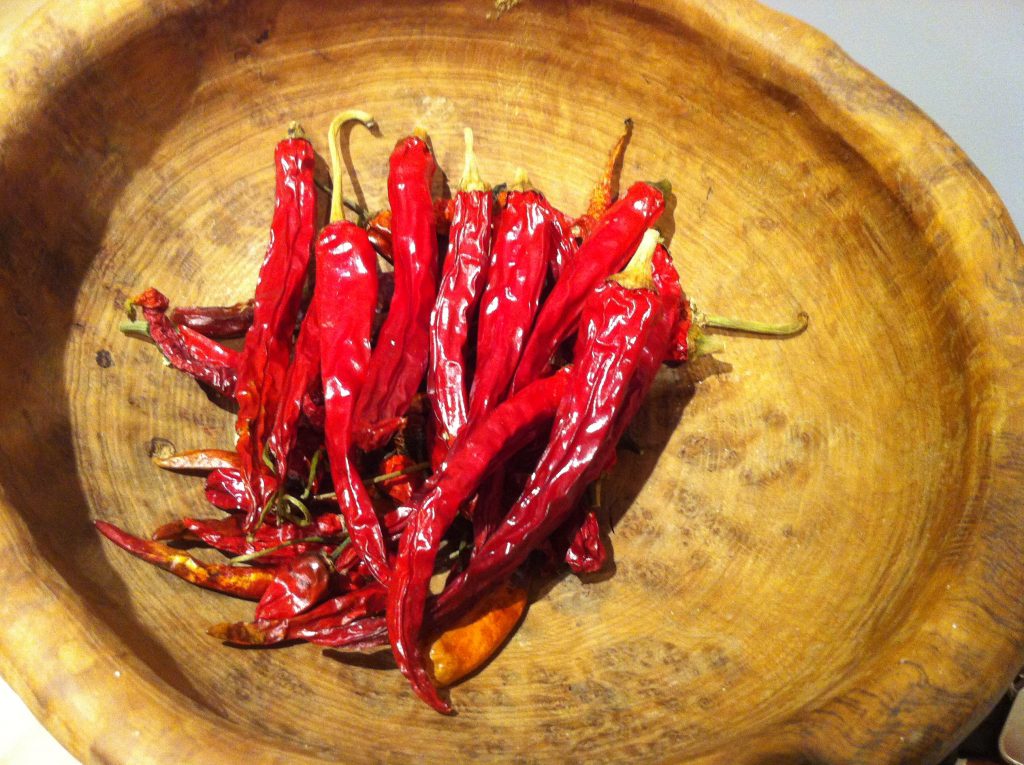 MOROCCO (C. annuum) – seed harvested 2016 -Seed acquired in 1997 from a desert oasis in eastern Morocco. Up to 3-inch three-lobbed boxy hot and sweet chilli pepper that turns brilliant red when ripe. Plants grow to 3 feet in height. Does well in a greenhouse border or pots. Best grown under glass but worth trying in a sunny, sheltered spot. 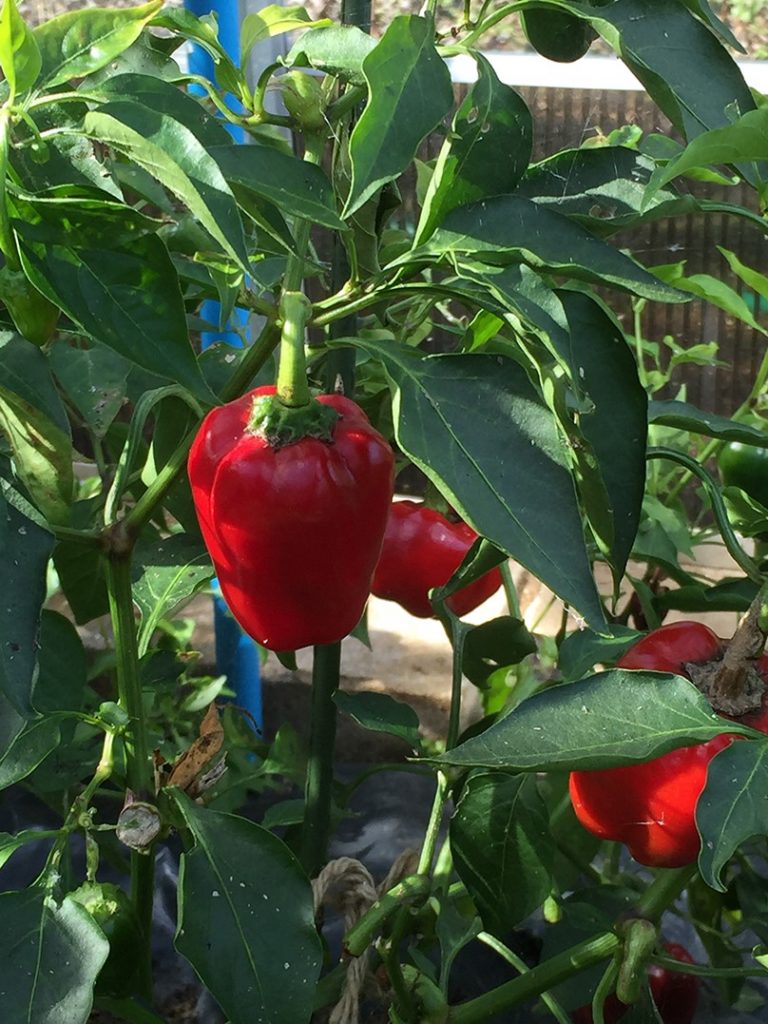 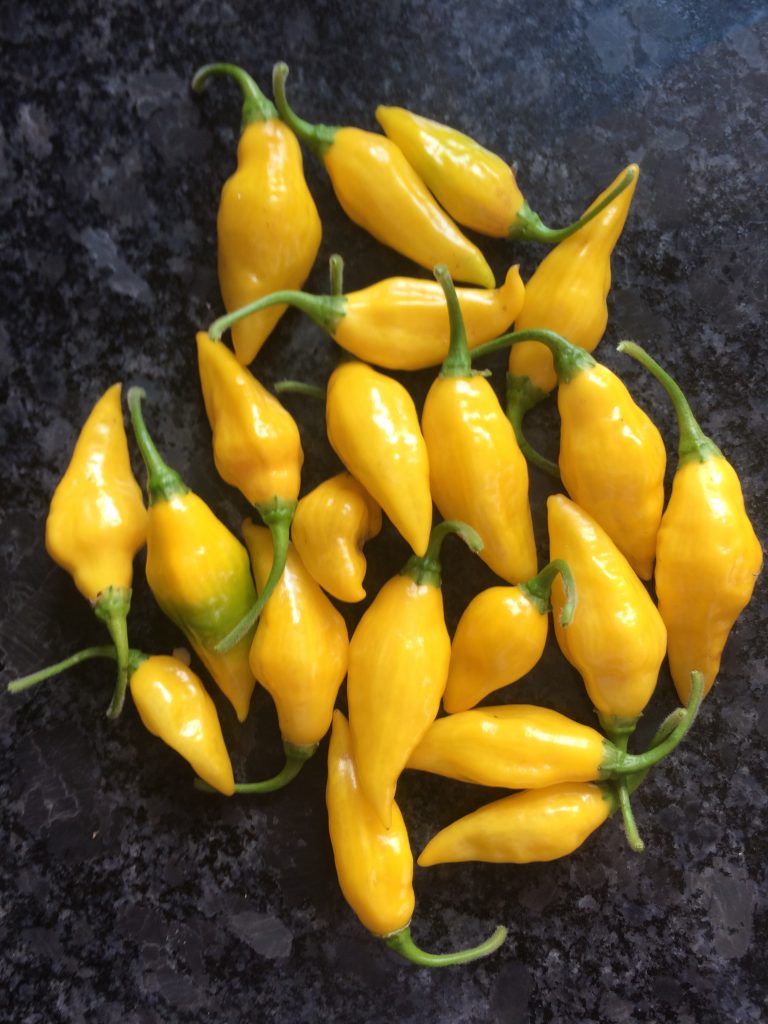 YANGON MARKET (C. chinense) – without doubt this is th hottest chilli I grow.  Discovered in a market in Yangon, this Naga type has a wonderful scaly skin.  Amazingly tough too.  I now grow just one plant which continues to crop well into teh New Year with some bottom heat in a cool greenhouse.  The plant in this photo is now four years old. 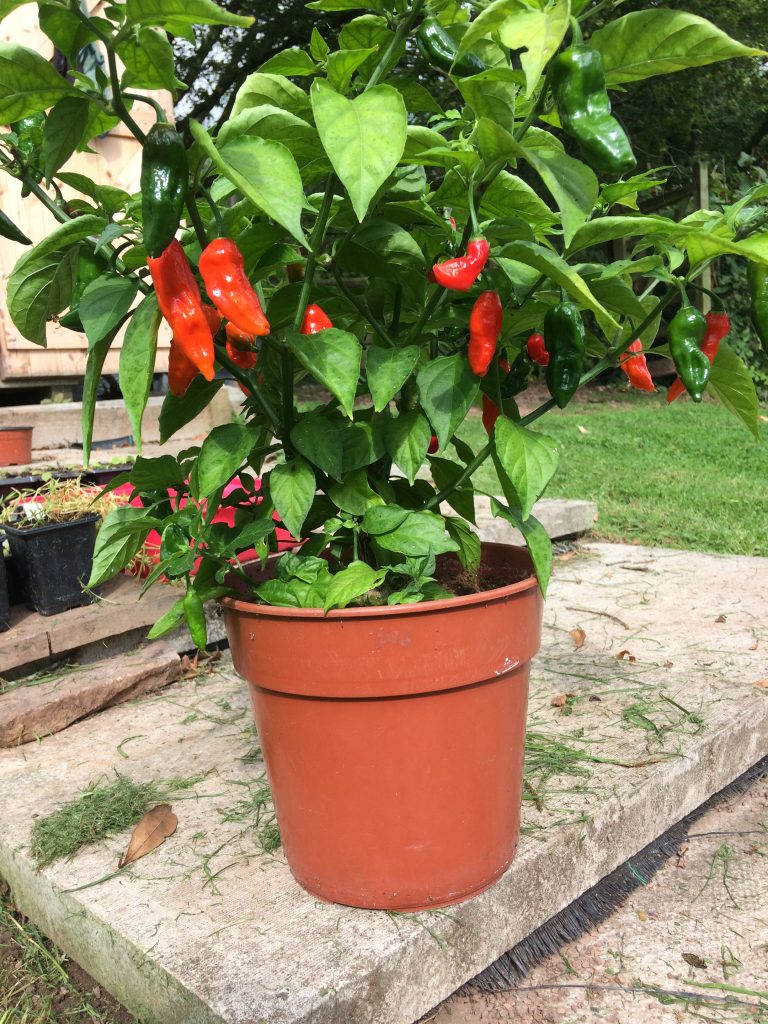 SYRIA – seed harvested 2019.  This is a classic ‘Lebanese’ type that I have grown on from seed originally discovered in Aleppo in 2011.  The local grower was Future Seeds, but sadly they suffered terribly during the civil war.  Grown to supply Syrian refugees who want a taste of their own country again this is probably the fines cucumber I have ever grown.  eaten whole straight from the plant it is unimpeachable flavoursome; sweet and crunchy.  Possibly derived from a local bred variety, Babylon, this variety has both male and female flowers so I doubt is an F1 hybrid.  It breeds true from saved seed 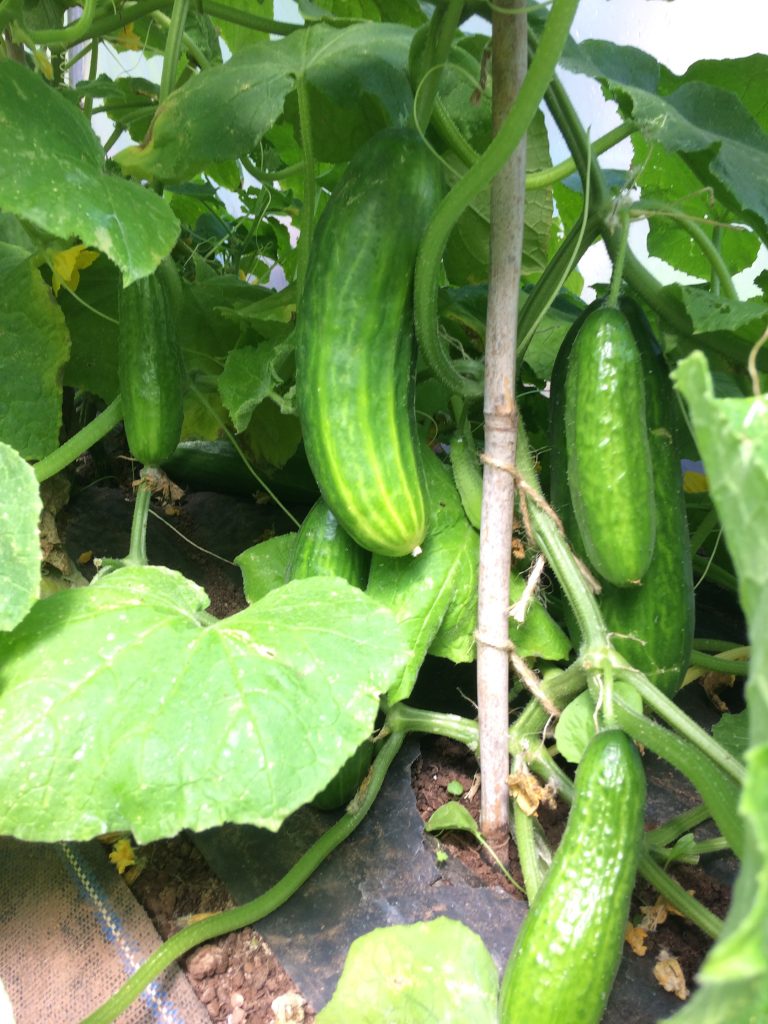 DEKAH (aka Dekan) – Seed harvested 2015 – I acquired this variety from the HSL and have grown it for some years.  However, the HSL has identified it as a listed variety called Dekan and so it is now no longer being included in their library.  I have plenty of seed of this lovely robust cucumber which grows very well outside  A prolific and tasty short slightly prickled Russian cucumber that I grow under glass in isolation. Long growing season and fairly resistant to botrytis. Early, prolific and very tasty. 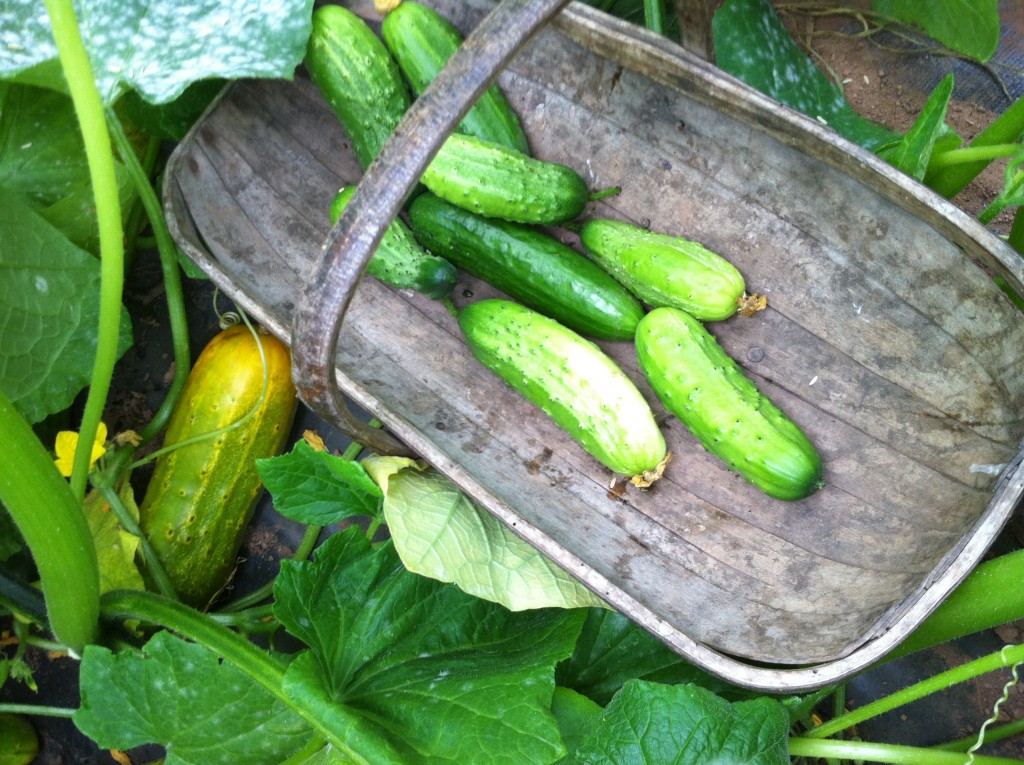 ZANZIBAR – seed harvested 2009 – I found this seed at a market in Zanzibar in 2007. Grown for the first time in 2009 it is a rampant type with very sweet dark green fruit that go brown as they ripen. Well worth growing. Prolific and very tasty. 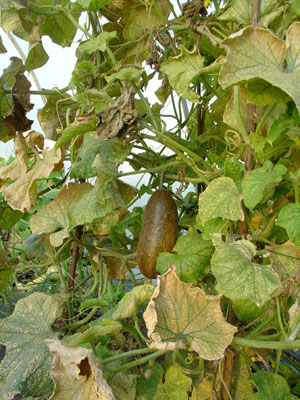 OREGON HOMESTEAD SWEETMEAT (C. maxima) – seed harvested 2018 – a large and prolific blue-skinned Hubbard type that will take over wherever you grow it.  Fruits up to 5 kilos if you let them.  Lovely orange flesh, with skin that is easy to peel the fruits keep well into spring.  An American heirloom bred for the cooler summers of north west USA this squash does very well in our climate.

TABLE QUEEN – Winter squash – seed harvested 2018
A delicious acorn squash up to 1 kilo that keeps well. Orange flesh within dark green skin. Sow 2 or 3 seed on edge into 4″ pots in a propagator at 70 degrees or a sunny windowsill in a warm room from early April. Thin out the weaker seedlings and grow on until May and plant out under large cloches in rich ground leaving plants at least 3 feet apart. Remove cloches in early June when the plants are well established. Stop leader at 3′ and pinch out side shoots at three leaves. Harvest in September. 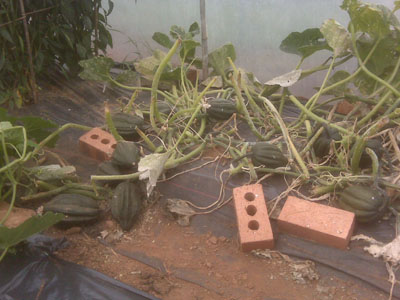 POMPEON – Winter squash – seed harvested 2010 – A delicious squash up to 2 kilos that keeps well. Deep orange flesh within dark green skin. Sow 2 or 3 seed on edge into 4″ pots in a propagator at 70 degrees or a sunny windowsill in a warm room from early April. Thin out the weaker seedlings and grow on until May and plant out under large cloches in rich ground leaving plants at least 3 feet apart. Remove cloches in early June when the plants are well established. Stop leader at 3′ and pinch out side shoots at three leaves. Harvest in September. 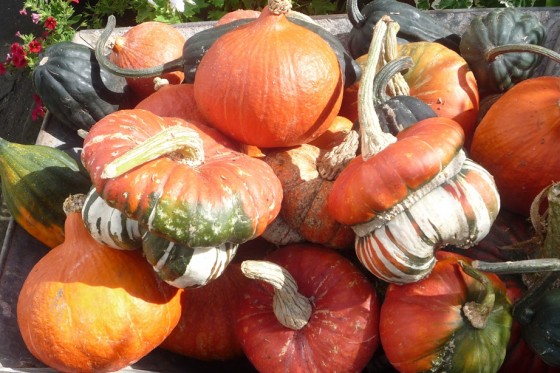 BURMESE SOUR TOMATO – seed harvested 2017 – I found this gorgeous tomato in a market in Yangon.  It is called the sour tomato because it is used in Burmese sour cuisine.  In fact it is one of the tastiest tomatoes I know and is delicious eaten thinly sliced, sprinkled with basil, salt and olive oil. 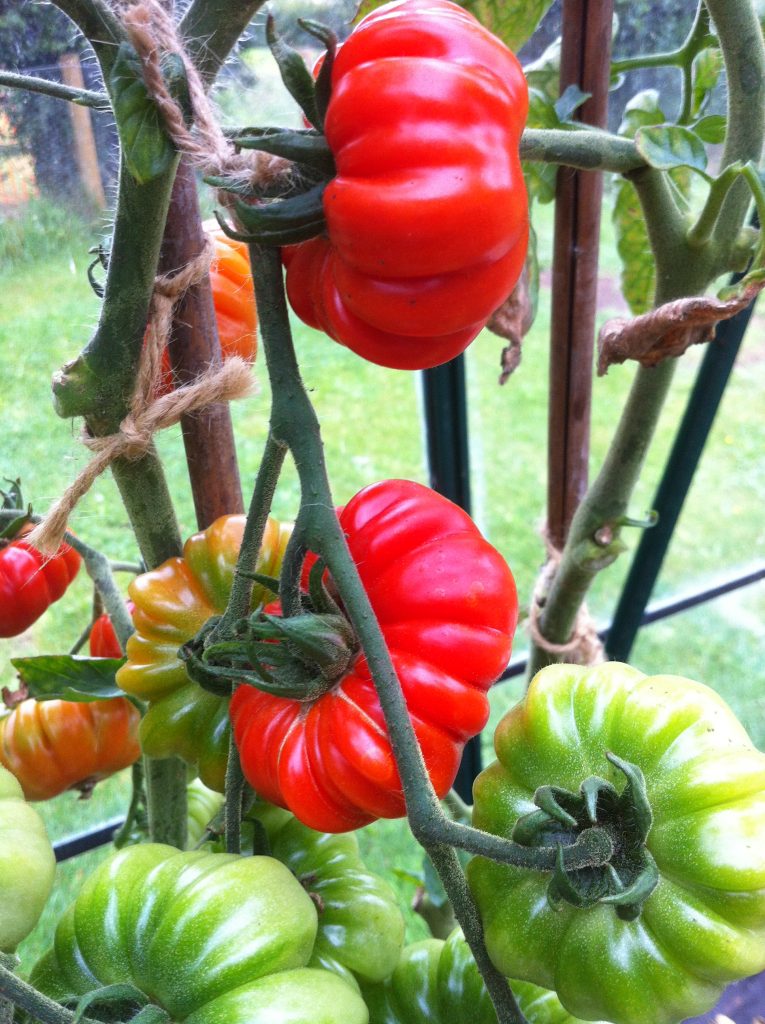 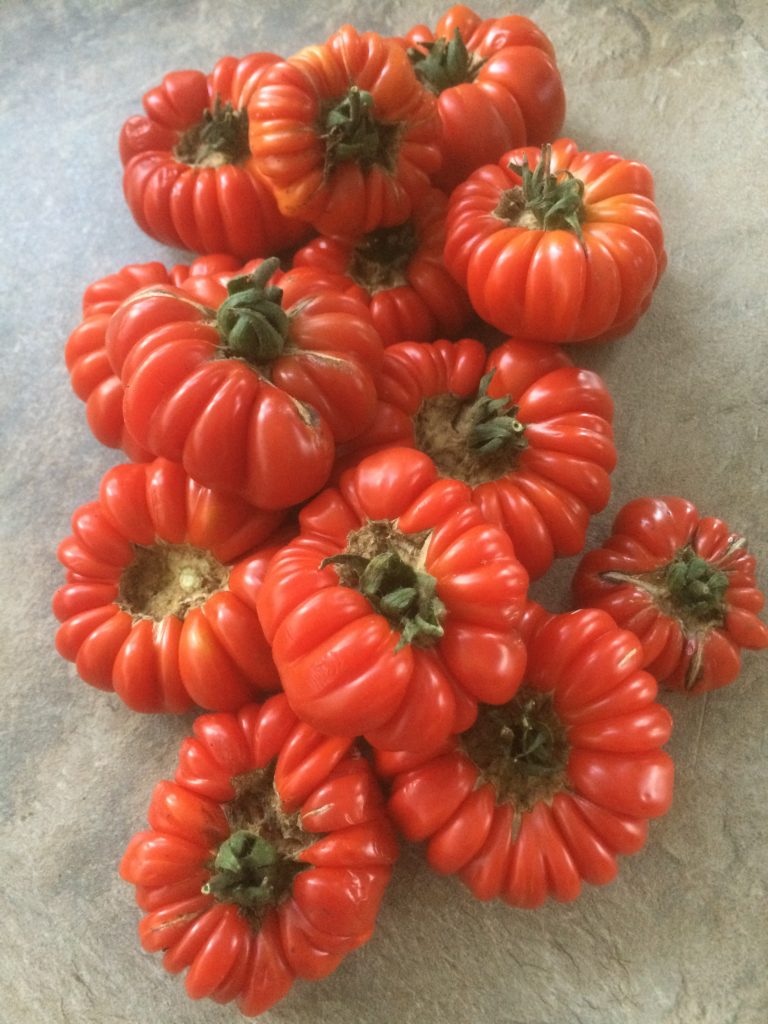 SYRIAN STUFFER – seed harvested 2018 – This tomato is from Future Seeds of Aleppo, which I was able to buy when in Syria in 2011.  The packet shows a fairly ordinary looking regular tomato, but what I have grown is very different.  A semi-determinate variety producing  many clusters of thin-skinned richly aromatic fruit the size of a small grapefruit or large orange.  Very nice sliced in a salad but even better when stuffed.   This is the first year I have grown this cultivar and so I am not sure if it is a hybrid so cannot guarantee that saved seed will come true.  Take a chance! 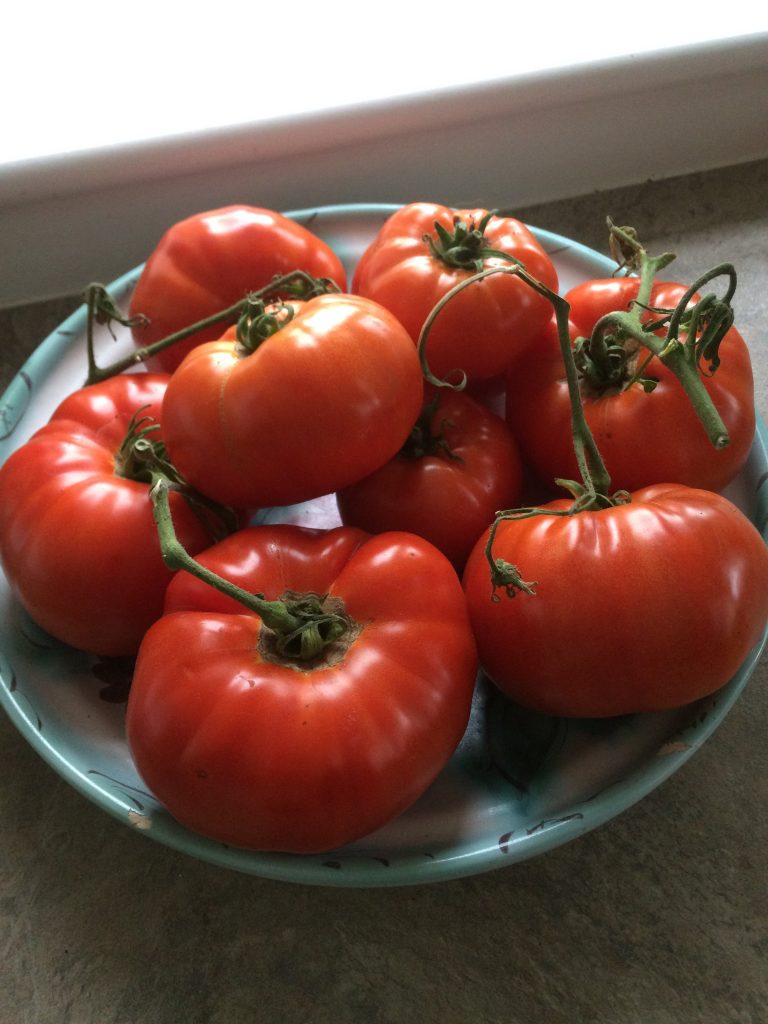 NELLO’S PLUM – Cordon tomato – seed harvested 2017 – Suitable for greenhouse cultivation. I was given seed of this delicious tomato by a smallholder in Tuscany who was the subject of one of my TV shows. The fruits are large, flavoursome and wonderful to cook with. Also I dry them in a cool oven for an English equivalent of Italian sun-dried tomatoes. Blanche, skin and freeze for use in soups and sauces in the winter. Makes great ketchup! Sow in trays in February in gentle heat and transplant into 3″ pots when four true leaves have formed. Plant in greenhouse border and grow up canes or thread around string. Stop at 7th truss. 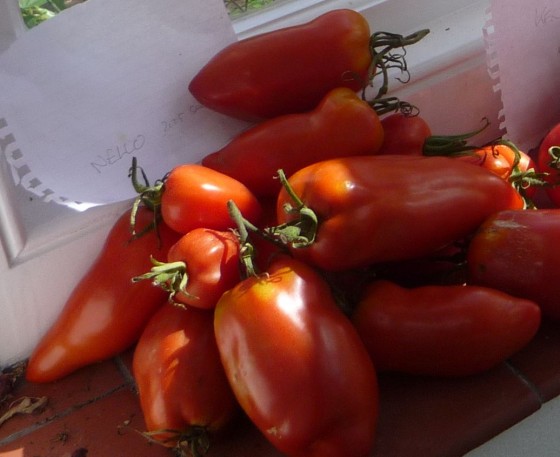 SPECKLED ROMAN – Seed harvested 2017.  This tomato was first given to me by Dave Rees.  A striking colourful large plum tomato which is great sliced in salads and used in cooking. Sow in trays in February in gentle heat and transplant into 3″ pots when four true leaves have formed. Plant in greenhouse border and grow up canes or thread around string. I have been cropping from eight trusses. 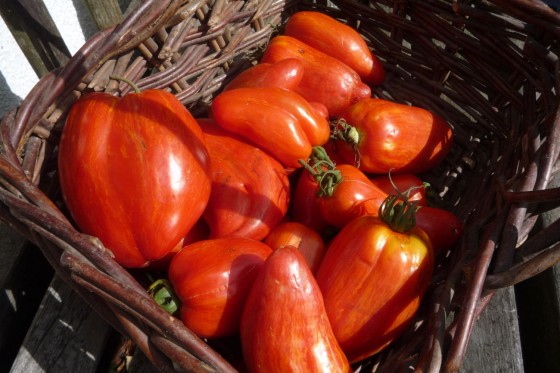 GRAHAM’S TOMB THUMB -seed saved 2018 – This indeterminate cherry tomato was given to me by Graham from Gabalfa in Cardiff.  He has been growing it for the last twenty years and his neighbour, who first gave him seed, grew it for the previous 30 years so this is a genuine Welsh heirloom tomato.  Thin-skinned and delicious. 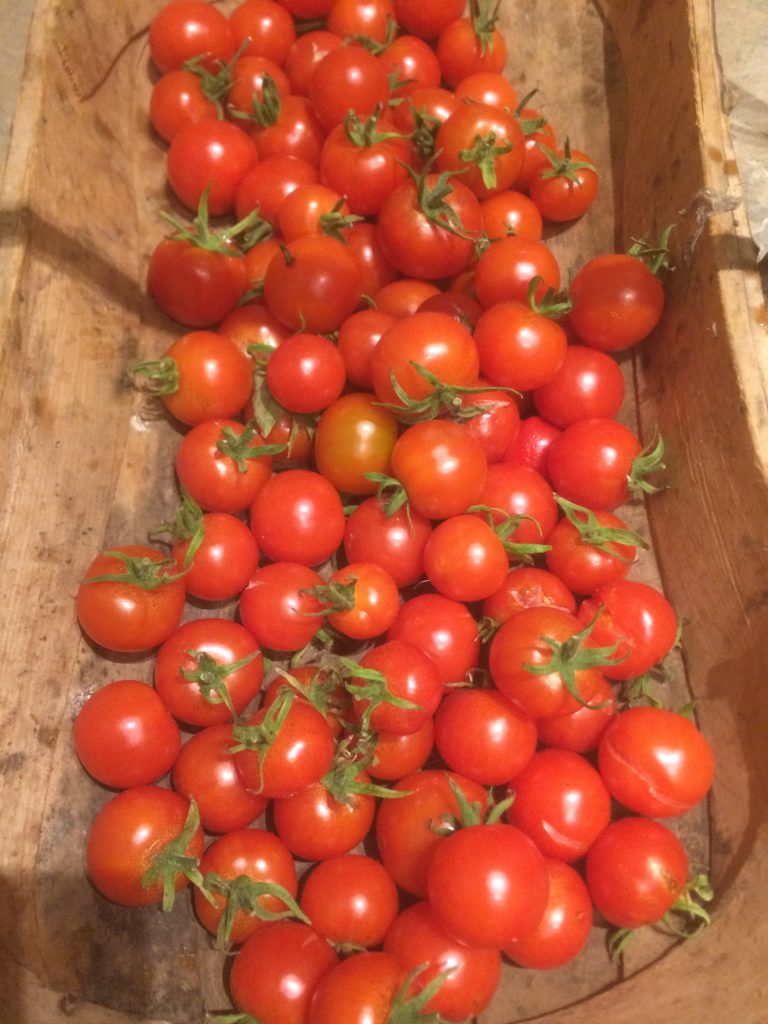