In the summer of 2010 Jesse bought a house with a long (50 metre) but narrow (8 metre) wide garden which faces north/south.  He is keen to have a vegetable plot of raised beds and covered the desired area with old carpet and polythene to supress the weeds.  Now, in early February 2011 it is time to start work.  The soil is medium dark loam with some clay, but with a good friable texture and hasn’t been cultivated for many years.  The two of us spent a fairly strenuous four hours making a start… 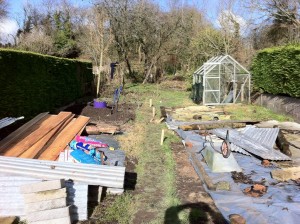 The garden is bordered by 2-metre high hedges behind a low retaining wall.  Jesse has decided to create a block of twelve beds, each 3 metres long by one metre wide with a metre-wide central path.  The raised beds will be constructed using 25mm thick, 25cm wide boards of locally sourced red cedar – a great timber for the job as it is very long-lasting without the need for anti-rot treatment.  Pegs mark out the edge of the first right-hand bed.

The ground that was not covered to supress weeds needs to be lifted and turned over so the top of the sod is in the bottom of the bed.  The central path sets the level for the base of the beds. 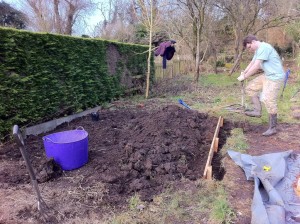 With the first board in place loose soil is thrown over the upturned sods and works starts on the ends by digging 5ocm wide trenches and also the second bed by excavating a full metre of soil which is turned into the bottom of the  new bed. Fresh and loose soil is also tossed into the position of the next row of beds. 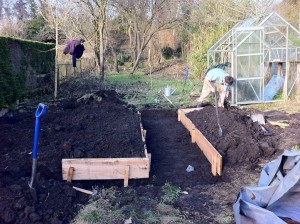 The loose soil that is dug out of the trenches created around the beds is used to fill the beds and also set to one side for future beds.

With all sides of the two beds now in place it is time to level the paths and rake over the beds ahead of adding fish, blood and bone slow release organic fertiliser and covering with black mulch.  One bed will be used to grow early potatoes and the other will be used for growing broad beans. 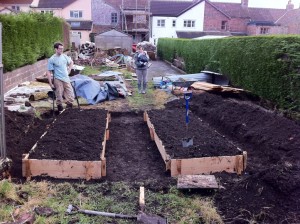 Two beds made, only ten more to go but a lot of rubbish to clear away first!