The last few days have been hectic and very rewarding.  Now is one of the sweetest times for a vegaholic as we can see spring is well on her way, the ground is warming up and there are a whole host of seeds to sow, plants to pot up, pot on and put out. 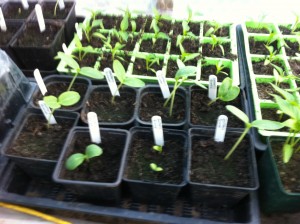 BUYING SEEDS: Although I save seed of about half of all the vegetables I grow, there are many, like roots and salad crops and especially hybrid seeds which I buy.  I am enraged at the cost of seed in the UK.  Compare a packet of seed from any of the main suppliers here with what you can buy from say the Italian seeds people Franchi and you might share my view.  However, sowing just the right amount of seed means one can get best value from a packet and properly stored, most seed will remain viable for years.

SOWING SEEDS: By far the most expensive seeds are those of F1 hybrid varieties.  Recently I bought a packet of broccoli seed called Olympia which contained just 24 seeds.  I sowed 2 into twelve small pots and they all germinated, so I transplanted the duplicates into twelve more pots.  I nly wanted twelve for my allotment so the other twelve are now in the hands of a couple of gardeners in the village.  There are two lessons from this experience.  Firstly, only sow enough seed to give you the quantity of plants you can comfortably eat as they come to maturity.  Crops like broccoli, calabrese and cauliflowers are in thehabit of maturing all at thesame time.  For me, even twelve of any variety is probably six too many.  With just two mouths to feed most of the time I know that over a three or four-week cropping period I will only really want to heads of broccoli for example per week.  The second lesson is to only sow one seed per pot of Olymia next time!

I am sure seed companies just love us to sow too thikly and too many and to buy fresh seeds every year.  But a packet of lettuce seed which contains 300 seeds will give you, as near as damnit, 300 lettuce to eat.  Sowing at monthly intervals through the season, maybe just a two-foot row of something like Little Gem means there are four or fiveto be left to grow on and maybe a dozen to transplant.  the transplants will mature a few days later than those left in the ground.  Sow the lettuce seed individually at one-inch (25mm) intervals.  The two-foot row will yield up to 24 plants, so even with this method you will end up either giving a few seedlings away or chucking them on thecompost heap.  But for a family of four, that packet of lettuce seed should last you at least two or three growing seasons. Small seeds like carrot should be sown as thinly as possible.  certainly no more less half an inch (12mm) apart.  Ditto radish, which can be thinned and eaten as you go.  Beetroot is another vegetable that should be sown very thinly and in short rows.  A 2-metre row will yield at least 40 beetroot and the seedlings can be transplanted when they have four true leaves.  Parsnip are slow to germinate and require warm ground, so starting them under a cloche is a good diea.  I put three seed at 6 inch (15cm) spacing and this out the two weakest seedlings.  Parsnips can grow very large – see my intro video – so just how many does the average family need through the winter.  I always grow too many – that is an five-metre row.  But many are given away.  If I was just to grow for Julia and myself then perhaps twent roots would be enough – a ten-foot (3 metre) row.  Parsnip seed have a reputation for not storing well.  This year I sowed  the last of a packet of seed I bought in 2009and every seed germinated!

Soon it will be timeto sow beans of all sorts – Runner Beans, dwarf and climbing French beans. But how many to sow?  Too often come August the world and her husband are giving away their gluts.Sensibly, a family of four can feast on 10-foot row of kidney beans and still have plenty for the freezer and to give away.  I only grow a one-metre row of kidney beans, but beans for drying I want lots of so up to ten metres or more of Borlotto or Ryder’s Top of the Pole for me!  Peas are another crop I can never have too much of.  The siurplus end upin teh freezer for consumption as a winter treat.

KEEPING SEED SAFE:  The best way to keep seed so they remain viable for several years is to store them in an airtight box or jars in the fridge.

Enjoy your gardening and see how much money you can save on seeds by a judicious use of this precious resource.

2 thoughts on “GETTING THE MOST FROM A PACKET OF SEEDS”