It may bea shitty, cold, wet day but that should not stop us from getting lots of stuff going for planting out in May when all danger of frost is past. At the weekend I sowed runner beans – an HSL black-seeded variety called Meesna, Borlotto climbing French beans and Ryder top of the Pole, all from seed I have saved in previous years. I sowed seed individually into root trainers and put on the greenhouse shelf to germinate. I already have squash, courgettes and cucumbers growing on in the greenhouse, but it is not too late to sow seed of these vegetables now. Being lucky enough to have several greenhouses and polytunnels to grow crops in, right now it is gratifying to see early potatoes making good growth, broad beans flowering and setting freely – helped by an army of bumble bees – and peas swelling in their pods. 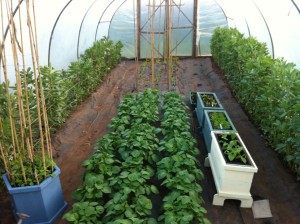 I transplanted sweetcorn into one of my polytunnels which should be ready to eat in July. I will sow a second crop next week to give me cobs in August. Again using root trainers and the greenhouse so the plants will be hardened off and ready to plant outside at the end of May. If you have got room in your greenhouse border or polytunnel then sowing carrots, beetroot, salad crops including radish, rocket , spinach and lettuce in early February promises crops throughout the spring.

If you haven’t got salad crops on the go start now outside and continue to sow a pinch of lettuce seed every couple of weeks for the next few months to give a constant supply of leaves into winter. Now is also an excellent time to plant up your main-crop of potatoes. Plant 30cms apart in rows 75cms apart using a dibber to make a deep hole so the tuber is at least 10cms below the surface. As the shoots appear in a few weeks time earth up to protect from frost and encourage a bigger yield.