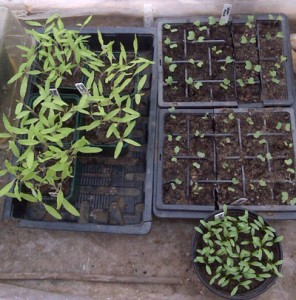 In the last month I have not been idle.  Despite a very unplesant cold snap in February I have been able to keep on top of my sowing schedule and hope that you all will now be limbering up to get a load of veggies going if you haven’t started already.

I started a second sowing of onion seed in mid-February.  It is certainly fine to sow more now.  I like Franchi Seeds who sell large packets of seed for a fraction of the price of their competitors.  I like to grow red onions which are as a easy to grow as white ones, but, for reasons I cannot understand, cost twice as much in the shops!  Try Rossa Lunga di Firenze.  I also planted a Dutch variety of shallot called Ouddorpse Bruin given to me by a fellow vegaholic.  Due to problems last year with white rot on the allotment I am growing alliums now on a new plot I have been given nearby which hasn’t had alliums on it for many years.  I also planted out a brilliant garlic, Solent Whight.  Highly recommended.  Just yesterday I saw shallots, onion sets and garlic for sale in a garden centre, so there is still time to get these in the ground.

By the end of February my tomato seedlings were reay to be transplanted into 3-inch pots.  I also transplanted the Syrian mini broad-beans I sowed a month ago into the allotment under a cloche.  I also transplanted under bell-cloches some rather pathetic cauliflower plants, All The Year Round, which I had been overwintering in the greenhouse.  The seed of the same variety I sowed at the end of January are growing well and are now hardening off in a cold-frame.  I will be interested to see how the two crops perform.

I also sowed a quantity of my favourite broad bean, Bowlands Beauty, into my new plot in a rasied bed which had a foot of wonderful compost added.

In the last couple of days I have sown more lettuce, Little Gem and an HSL variety, Brown Bath Cos.  If you want to have a continual supply of lettuce througout the year successional sowing is essential.  I have lettuce seedlings in a polytunnel which I will transplant in a coule of weeks’ time.  My over-wintered lettuce in the polytunnels are almost ready now that the endive and radicchio on the allotment are all but finished.  I will sow more lettuce later in March – just a pinch of seed at a time.

Now too is a good time to start off a few leeks in pots in the greenhouse or on a sunny windowsill.  And today was a bit of a marathon as I sowed parsnip, spring onions and radish on the allotment under cloches and in the  greeenhouse, fennel, celeriac and artichoke in modules in the propagator.  I also sowed some patio tomatoes, Tumbler To and Maskotka, which will be planted up finally into hanging baskets in late April.  And finally I sowed a nice purple-flowered climbing French bean called Cobra which gives a good crop of green beans and a yellow wax bean called Gialli.  These will be planted out in a polytunnel for an early crop at the end of March or in early April along with sweetcorn.

With sowing over it was time to pot up some chillies and spend a considerable amount of time reconfiguring everything to fit in the greenhouse!

With sowing over it was time to pot up some chillies