At last, the euinox is just past and for the next six months the sun is in the sky for more than twelve hours a day.  Yipee.  Lovely early mornings beckon for time alone to sow, plant, hoe and harvest.  And boy is it kicking off big-time right now.

Today was just blissful.  Clear blue skies, a temperature of 18 degrees and plenty of time to work on the plot.

First up was to transplant a summer cabbage called Greyhound into a bed I had ready at the top of the garden.  I had sown seed in root trainers in the greenhouse back in February. The plants have been hardening off in a cold frame for the last three weeks and were ready to go in the gound.  Likewise I planted a broccoli called Olympia.  A fiendeshly expensive hybrid we’ll see what it does but I got every seed in the packet to grow – 24 in total – so my neighbours are benefiting too.  I also planted up a couple of short rows of Little Gem lettuce for good luck.

It was time too to get the last of my early spuds in the ground.  Using my tried and tested method of planting through black-poly and covering with a cloche I now have twenty Nadine safely in the soil, and hopefully providing meals in June when the spuds in the polytunnel have all been eaten.

Rocket forging ahead on 23rd March

The crops in the polytunnels are doing well now we are having a decent warm spell of weather.  I have been harvesting lettuce for some weeks but there are more than enough left to keep me and the neighbours in salad stuff until the frst of the outdoor crops come fit to eat later in April. 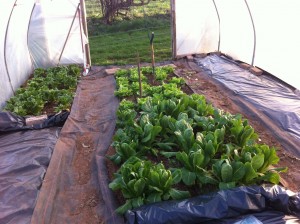 gaps opening up as harvesting enters its fourth week

My overwintering Aquadulce broad beans are looking promising, the first flower buds are starting to form and I even noticed a solitary bumble bee buzzing hopefully in the tunnel – maybe she needs to wait another couple week for the first flowers to open!