Broad beans are one of my favourite vegetables.  They are very easy to grow and will do well in most soils.  Black fly can be a problem in summer when the plants are in full growth but by pinching out the growing tips when the first flowers have set helps reduce infestation

Two popular varieties for sowing in the autumn are Aquadulce – not a heavy cropper but pretty indestructible and you will be eating beans early in June if they grow well, and The Sutton, a dwarf variety that does not need staking. However, this variety doesn’t like getting too cold and you can grow under cloches right up until mid April when they flower and you need the bees to pollinate them and furnish you with a good crop. The Sutton can crop as early as Aquadulce and even earlier if the winter is mild. 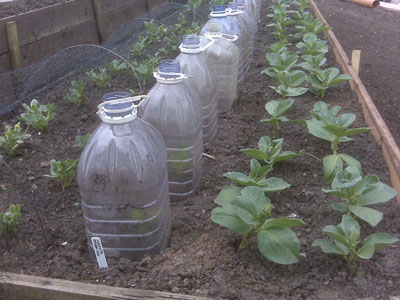 Autumn sown Aquadulce on the right under a net to keep off the birds. On the left are Bowland Beauty sown directly into the open ground. Lettuce in the centre under bottle cloches. Photo taken late March. 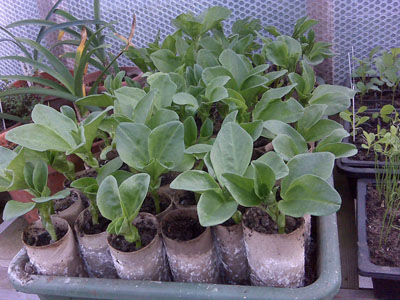 I like to grow overwintering broad beans in one of my polytunnels as I find that in a very cold and damp winter young plants outside are prone to rot.  Last year I sowed seed of my favourite variety, Bowland Beauty in the greenhouse, individually into loo rolls towards the end of January.
In this video I show how to sow broad beans for an early crop. 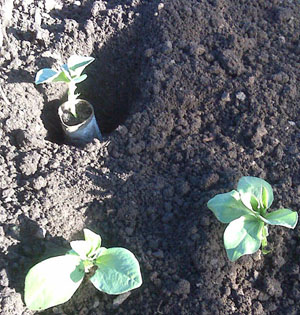 Early in March I transplant the beans when they have at least four true leaves into a double row, spacing each plant 20cms (9 inches approximately) apart, the double row being 20cms wide, burying the loo-rolls up to the level of the first leaves. 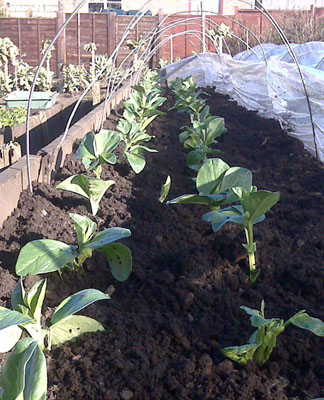 By late March the beans are growing strongly and I can remove the cloche, put bamboo stakes and string around the plants to stop them from falling over. 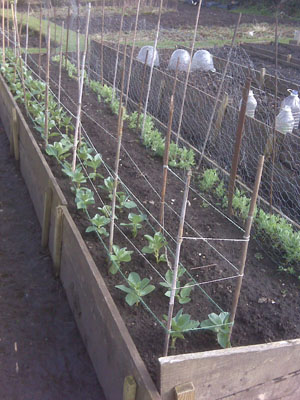 With luck I shall be eating fresh broad beans early in June.

By early June my first sowing of Bowland Beauty has set a modest number of pods.  Because of the very cold and dry spring the crop is not as advanced as I would normally expect and also the growth is very uneven.  With the sudden onset of very hot weather late in May black aphids descended on the plants.  I pinched out the growing tips to deter them and also sprayed the crop with an organic plant stimulant containing soap to kill the aphids. 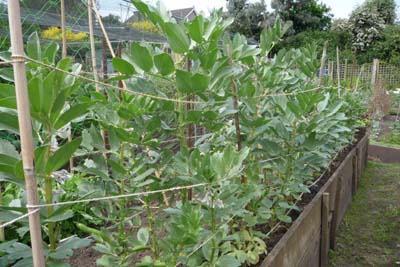 As a keen collector of different vegetable varieties and also as a Garden Organic seed Guardian I grow a number of other varieties of broad bean to save and share seed. 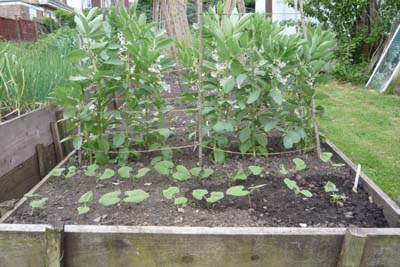 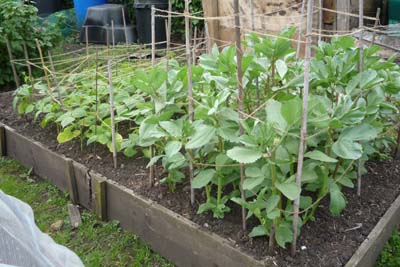 A variety I have been growing for many years is White Continental, seen here just coming in to flower at the end of May  after a late sowing in April. 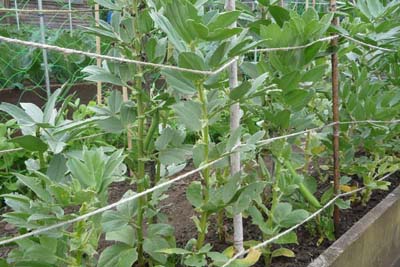 But my favourite variety is Bowland Beauty for its long pods and delicious green beans.  In a week or two I’ll be eating these.